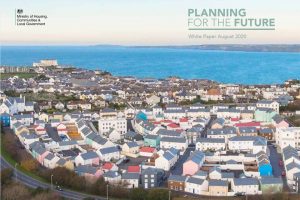 At the start of August, the government launched the long-awaited Housing White Paper. In the immediate aftermath of its release there was a lot of initial comments and reactions, many of which remarked on its complexity.

At Skyline Comms we are committed to providing high quality information to our clients, and to our wider network of planning consultants and property developers.

So over recent weeks we have taken a closer look at the White Paper, and have identified what we believe are the key takeaways. We have also highlighted what implications they will have for your engagement strategy.

We have outlined our thoughts below, but we welcome your comments too.

The White Paper proposes that local authorities will be required to meet a timetable, of no more than 30 months in total, for key stages of the Local Plan process.

Our experiences with clients and others tell us that it can, with the current process, take approximately seven years for local authorities to agree and begin to implement a Local Plan.

If the government is to succeed with its build, build, build agenda, which we have referenced in previous articles, they are going to have to tackle this lengthy process.

The Paper also remarks that under the current system it can often take more than a decade for sites to go through the Local Plan process- another reason to streamline the system.

What are the ramifications if the timeline is not met?

In an attempt to speed up the process, the government is proposing to hand out fines to councils and the planning inspectorate if the new timeline is not met.

From our continued engagement with many local authorities, especially during the recent lockdown, these potential fines could provide the real push that many councils need.

The vast majority have been hugely affected by the COVID-related restrictions imposed in March 2020 so, depending on how big the fines could be, the prospect of them will allow many local authorities to make an argument about needing to be prudent with local finances.

With a more defined timescale, this will make it even more important that you have a well-planned communications and engagement strategy for your entire process. This will include a strategy to engage with the relevant stakeholders at the earliest opportunities.

Engaging early in the process- in this case during the six months outlined for Stage 1 of the proposals- is vital because if you are there from the outset, when the local authority will be organising the plan, then you are more likely to have success when it comes to submitting planning applications after the Local Plan actually comes into force.

2) Seeking to increase the supply of land:

Increasing the supply of land has been on the agenda for a number of years- Sajid Javid MP raised this in 2017, when he said “it doesn’t matter how many planning decisions you make, you’ve got to start off with the right amount of land. If you’re not making enough land available then you’re not going to get the massive increase in supply that we want to see.”

To deliver the government’s targets of 300,000 homes annually, the White Paper proposes, for example, a standard method for establishing housing requirement figures, which ensures enough land is released in the areas where affordability is worst, to stop land supply being a barrier to enough homes being built. It also notes that Local Plans will need to identify areas to meet a range of development needs, for a minimum period of 10 years.

This proposal further underlines the importance of community engagement at the earliest opportunity. Crucially though, it is important to note that the minimum period of 10 years will cover 2.5 election cycles.

While this is likely to give developers and consultants additional opportunities to submit planning applications, because of potential changes with administrations, cabinet members and local councillors, it does mean that you will need to have a consistent engagement strategy.

The White Paper remarks that since becoming a statutory part of the system in 2011, Neighbourhood Plans have become an important tool and allowed communities to think proactively about how they would like their areas to develop.

With than in mind, the government proposes to make it easier to produce Neighbourhood Plans. It proposes that they would play an important role in producing required design guides and codes.

From our experience of working with clients on applications that involve Neighbourhood Plans, community engagement becomes essential because those plans carry a lot of weight in the process.

While you might commonly look at direct community engagement and engagement with community groups via social media, we often recommend for developers and planning consultants to take a multipronged approach here- potentially including strategically planned local PR campaigns among other avenues.

With a former journalist and PR professional as part of our team, we are lucky to offer this as an additional service.

4) An increasing role for online engagement:

Over the last 6 months, since the COVID-related lockdown, the industry has been forced to adapt and use technology such as Zoom to facilitate online meetings.

The White Paper has sought to build on this ‘new normal’ by proposing that the planning process should harness “digital technology to make it much easier to access and understand information about specific planning proposals”.

It is about balance though

Clearly the industry has had to get used to using digital engagement strategies, but when the country returns to the ‘new normal’ we expect to see a mix of both in-person and online engagement going forward.

In the early stages of the lockdown our team were tasked with carrying out research for a client, looking at how a number of local authorities were adapting their planning committees to the online world.

Our research showed that a number of authorities had opted for virtual meetings, but had initially removed the option for members of the public to speak. Any controversial applications that were approved during this time would have therefore faced claims that they gained approval through the back door, with all the relevant bad publicity that comes with that.

Now that digital engagement will play a part going forward, it will be vital for developers and planning consultants to ensure their applications and engagement strategies are transparent.

While our team continues to stress that online engagement strategies, including targeted community advertising, is important alongside traditional engagement with local councillors and others, it is also important to remember that not everyone will be able to take part in these online activities.

For some, they will still rely on information at their local library or from their local newspaper, so a strategy including local PR campaigns will provide additional benefits and will show a willingness to engage all sections of society.

The White Paper makes reference to local authorities being liberated to plan and give more attention to improving the quality of new development, but also includes mayoral combined authorities in that statement.

As we have made reference to in this article, the mention of mayoral combined authorities in the White Paper again suggests that there may be plans for the devolution of planning powers to these authorities.

In any case, engagement at all levels of government is always a sensible approach to take. Looking at each of these takeaways, the central implication for the engagement strategies for developers and planning consultants would be the importance of consulting communities earlier and of not only understanding the key stakeholders, but also keeping up-to-date with any potential changes on a regular basis.

Skyline Comms offers political insights at a local and national level, as well as political and community engagement to support applications through the planning process.

To find out how we could support your political and community campaigns during this challenging time, please email our Managing Director James Hockney on j.hockney@skylinecomms.com or call 020 8798 3730 / 07958 389713.